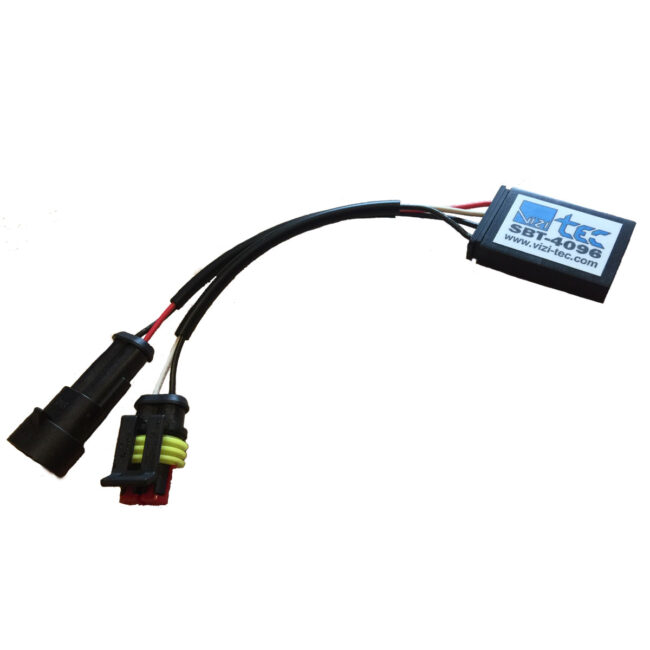 Based on the SB2 and SB3 firmware and designed for a car or a truck’s third brake light where only 2 wires are present. Such as those commonly found on the rear windows of trucks and cars.

Based on the SB2/3 firmware and designed for a vehicle’s high-mounted stop light where only 2 wires are present. Such as those commonly found on the rear windows of trucks and cars. The SBT-4096 requires only one signal wire and a ground return wire to implement; No need for a third constant 12V power. The internal circuit uses advance super-capacitor technologies to harness and store power each time the brakes are applied. The selectable switch allows the customer to select and store 1 of 4096 profiles combination into memory in a tiny 35mm x 24mm x 8mm waterproof module.

FUNCTION
Vizible Technologies’ SupaBrake modulators are designed to enhance the reaction time of the vehicle behind you. It is designed to pulsate your vehicle’s brake light(s) with a variable number of flashes calculated by its embedded algorithm. The algorithm is based on the rate at which you apply your brakes. As a result, the brake light(s) are flashed in a more subtle manner at lower speeds(when brakes are frequently used), and more aggressively at higher speeds(when brakes are not used for longer time intervals). Whereas other simpler products on the market that continuously “blink” their brake light(s) with an annoying repeating sequence – each and every time their brakes are applied! Our Supabrake product pulses in driving conditions when you need to get the immediate attention of drivers without annoying them.

Upon applying the brakes, the SupaBrake sends a burst of pulses to your motorcycle’s brake light(s). The duration of the burst is a function of the time elapsed between the current brake cycle and the previous. After the burst, the unit allows the rear brake light to function normally(solid brake light). This algorithm is designed to eliminate target fixation as found in cheaper, passive versions that continuously “blink” the brake light(s) even though the vehicle is at a complete stop.

Example at low speed
When the frequency at which the driver/rider applies the brakes increases, (i.e. during low speeds such as city driving), the shorter the burst of flashes to the rear brake(s) light will be. If the brakes are applied within 0 – 12 seconds, the brake light will NOT flash – thus allowing it to function normally (solid brake light). This condition is most valuable during heavy stop-and-go traffic so as not to annoy the person or police in the vehicle behind you.

Example at cruising speed
When the frequency at which the driver/rider applies the brakes decreases, (i.e. at cruising speed), the longer the burst to the rear brake light will be. This condition is most valuable during quick sudden decelerations at speeds which require quick reaction to changes in traffic conditions or other driver’s intentions. It has been scientifically proven that a quick flashing of a vehicle’s brakes will alert the driver behind much sooner … and the SupaBrake Flasher does this for you.

Don’t put other outdated bulkier modules on your vehicle that pulsate your brake light each and every time you apply your brakes. Most of these cheaper engineered modules will continue to flash your brake light(s) with the same irritating routine even when you are completely stopped in traffic. This is not only illegal and annoying it detracts from the visual appearance of your vehicle. You get what you pay for.